The Free State Province is endowed with rich heritage which forms the basis for tourism routes which have become tapestry for culture, leisure and development. This open sky country is divided into:

The Cheetah Route runs along Mangaung, Botshabela, Thaba-Nchu and Ladybrand. The first three towns form the Mangaung Metropolitan Municipality. Mangaung is the capital city of the province and it has resulted in the route being famous for business, medical and educational tourism. The Cheetah will forever be at the apex of history as it was the birthplace of the ANC an 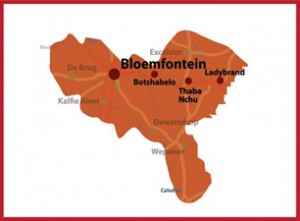 d other political parties, which make this route rich in history and heritage of the country. The seat of the provincial Legislature and capital of judiciary as the Supreme Court of Appeal is situated in the famous historical and architectural President Brand Street. The city also pride itself of being the home to top flight sporting teams from football (Bloemfontein Celtics), cricket (VKB Knights) to rugby (Toyota Cheetahs).

The route pride itself of being the birth place ANC and other existing and defunct political parties. One of the Presidents of the ANC, Dr JS Moroka was born and resided in Thaba–Nchu – he was the President of the ANC from 1949 – 1952. The President Brand Street, is famous for its architectural building which are today used for seat of legislature, museums and seat of Appeal Court. Lekgalo la Mantsopa, where the legendary Basotho Prophet Mme Anna Makhetha Mantsopa resided in Ladybrand is today one of the major tourist attraction along the route. There are quite a few museums found in Mangaung that provide the history and heritage of the area.

Major medical institutions are found in this route and the University of the Free State Academic Hospital has made a number of ground breaking medical discoveries.

Mangaung, boasts itself about the very first digital planetarium in Sub-Saharan Africa. The planetarium was officially opened in November 2013. The Naval Hill Planetarium was established by the University of the Free State with the support of the Department of Science and Technology, DESTEA and Mangaung Metro Municipality. The Central University of Technology has also brought first technological techniques that predicts drought patterns using the indigenous knowledge and IT techniques. The university also developed a solar mobile phone charger that is utilised by students at the campus.

DID YOU KNOW ABOUT THE FREE STATE?

If you want a taste of everything that is typically “Free State”, the Lion Route has it – from culture to nature to history. The towns along the Lion Route are: 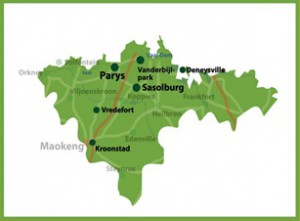 Situated at the wall of the Vaal Dam, Deneysville is just an hour’s drive from Johannesburg. Known as SA’s “Inland Riviera”, Deneysville is famous for:
• Water sport of all kinds, from power boating to laid-back pontoon boat trips and fishing charters.
• The annual “Round the Island” Yacht Race – South Africa’s biggest inland regatta.
• The Deneysville Croc Ranch which has about 2,800 crocodiles and also farms emus.

Sasolburg is most well known for its unique oil-from-coal installation, but it has plenty else to see and do:
• An Olympic size swimming pool and world-class athletics facilities.
• The Ettienne Rousseau Theatre which hosts a wide range of Afrikaans and other artists.
• Gallery 88 which houses a stunning collection of contemporary South African art.
• A bird sanctuary with up to 70 species of Highveld birds.
• The Riemland Museum and Riemland Wine Route at Heilbron, an hour’s drive away.

The beautiful town of Parys is situated on the banks of the Vaal River, and has become a firm favourite for both art and adventure lovers. With so many attractions, you’ll find it’s the perfect paradise for you.
• 42 restaurants and a wide variety of arts & crafts shops.
• Play a round of golf on Golf Island in the middle of the Vaal River.
• Pick berries off the bush at Bon-Af Berry Farm and see SA’s only black raspberries.
• Interact with the big cats at the Dell Cheetah Centre.
• Visit Tumahole township just outside Parys – birthplace of Free State Premier, Mr Ace Magashule.
• Head for the Vaal River or the mountains of the Vredefort Dome and enjoy nature from land, water and sky.

The small town of Vredefort is the gateway to the world’s oldest and largest crater, the Vredefort Dome. Recently named a World Heritage Site, the 300km-wide crater was created when a meteorite the size of Table Mountain-sized struck the earth 2,000 million years ago. Attractions include:
• Spectacular rock formations, including the world’s only pink granite.
• A wealth of plant, bird and animal life.
• Water sport on the Vaal River.
• A nearby Lion Breeding Programme.

WALK THROUGH TIME IN KROONSTAD

Kroonstad was the first town established after the Orange Free State became independent. Situated on the banks of the beautiful Vals River, a tributary of the Vaal, it is rich in history and outdoor opportunities. Historical sites include:
• A concentration camp and blockhouse from the Anglo-Boer war (1899-1902).
• The Bloemspruit Monument for concentration camp victims.
• A Garden of Remembrance for Allied victims of the two world wars.
• Prehistoric stone corbelled huts.
• San rock art and fossils.

The Eagle Route, is known as the jewel of the province due to its scenic beauty, rich history & heritage, leisure tourism and adventure tourism. The route runs along the majestic Drakensberg Mountains that forms a pictographic landscape at the back drop of the Eagle Route. The picturesque landscape makes the route one of the most scenic area in the province with some of the government owned resorts and reserves nestled in this sandstone mountainous route. One and 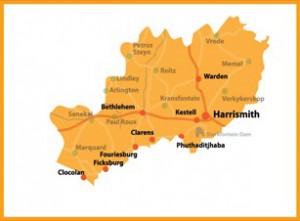 only life Basotho Museums is situated in this route – living the Basotho nations culture and practices from the 17th to the 20th century. For the adrenaline junkies this is the perfect place to visit, which features white river rafting, abseiling, horse riding, 4×4 and quad bike trails, hiking trails and safaris.

A number of historic and heritage sites are found in the area, ranging from rock paintings, museums, significant sites of the Anglo-Boer War, traditional ancestral caves, smallest Church in South Africa, vintage tractors collections, historic tree, fossils that defines scientific discoveries. Some of these sites are:

If you like to get out of the comfort zone to test the adrenaline, then the Eagle Route is the perfect venue. Some of the 4×4 and quad bikes trails runs on the slopes of the mountains were driver skills are tested. The white river rafting takes place along the Ash River outfall provides a breath taking experience for first time tourists and for those just can’t stop wanting for more. The 34 metres chain ladder completes the route’s adventure by summiting the Sentinel Peak, which is 3000 metres above sea level. Some of activities are:

The mountainous landscape of the Eagle Route provides tranquillity and scenic views. This are complemented by rock arts paintings, safaris, vulture restaurant where eagles are feed with animal and bird carcass, arts and craft galleries, boat cruises, trout fishing and cherry harvest festivities. Golden Gate Highlands National Park is nestled in the Clarens valley making it a must visit area for relaxing and Sterkfontein Resort and Reserve overlook the dam making it a perfect location for those quite moments. For outdoor lovers, Glen Reenen caravan park. Some of the activities and sites are:

The Springbok Route, is famous for the history & heritage that goes back to the 19th century during the Anglo-Boer War. The Route is also famous for adventure tourism, which includes breath-taking 4×4 and quadbike trails, water sport, gliding, horse riding trails and leisure tourism. The route runs along Jacobsdal, Koffiefontein, Jagersfontein, Phillipolis, Bethulie and Gariep Dam that was declared as municipality in 1994. 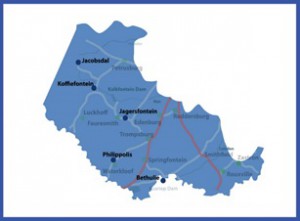 Even though the Anglo-Boer might have occurred some centuries ago, the memories are still alive in most towns along the Springbok Route. Nations across the globe still pay homage to their fallen forefathers from previous generations. Today the war has left trails of the history and heritage sites such as museums and war memorials. Some of the sites are:

The Springbok has a mixture of two landscape, the flat area and the hillside area near Gariep Dam and Bethulie – making the area a perfect local for 4×4 and quad trails. The flat area is usually used by aviation community for gliding and flying competitions. The Gariep Dam, which is one of the largest man made dam in the country is normally a perfect venue for water sports. Some of the adventure hot spots are:

The tranquillity of the area makes it a perfect retreat for the family and couples alike. The flat fields and the open skies are perfect to those night star gazing. The Gariep Resort & Nature Reserve, Tussen-die-Riviere Resort & Nature Reserve, Forever Resort and De Stilj Hotel are some of accommodation that could accommodate groups. On the other side there are varies accommodation types for different clientele ranging from 4 Star B&B to Backpackers. The area is also huge in safari and hunting making it one of the largest area for game hunting during peak hunting season. Some of the leisure activities are:

The area has an eco-tourism centre, known as Gariep Fish Hatchery – it is an opportunity to see how yellow fish, carp and barbell are hatched.

The Flamingo Route, is known to be the bread bucket of the province due to its vast agricultural fields that produces maize. The area is also known for its produce of gold as the result of the discovery of gold in the 19th century. The effects of global warmin 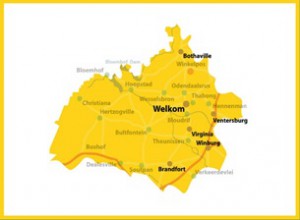 g that led to drought and reduction in agricultural produce and the decline of mining activities in the area as seen other economic sectors such as tourism is increasingly becoming key economic sectors for the region. The main offerings are combinations of variety of leisure activities, exploring a local gold mine, game viewing and visits to key historical sites. The route runs through Brandfort, Windburg, Virginia, Ventersburg, Welkom and Bothaville.

Bothaville is considered to be the country’s maize capital, it is characterised by undulating maize and sunflower fields. The small town is the host to one of the most successful and the biggest international agricultural show – Nampo Harvest Show. The abundance of sunflower has seen the town being the site of the first ethanol plant in the country.

Just off the R70 north of Welkom lies the Phakisa Freeway Race Track, the fourth fastest track in the world. With a Formula 1 Grand Prix flat circuit and a Super Speedway Oval, Phakisa hosts a number of national and international; races – including the six World Motorcycle Grand Prix events to date, the South African Motorcycle Grand Prix, the National Super Series and the Midas Historics Tour. With the 14 turns, the 12m-wide Grand Prix Track is rated as one of the safest circuits, but also one of the most demanding. As Valentino Rossi says; “…you have to be brave to win here.”

The Flamingo Route was also affected by battle fields that took place in the province and this has left a trail of historic places of interests along the route. Some of these sites are: